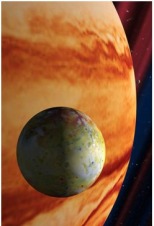 (I measured the skies, now I measure the shadows.
Skybound was the mind, the body rests in the earth.)


Objectives of this lab:
1. Determine the mass of Jupiter.
2. Gain a deeper understanding of Kepler's third law.
3. Learn how to gather and analyze astronomical data.

The CLEA software simulates a telescope allowing you to make your “observations” of these distant celestrial objects. The program has already been downloaded from the CLEA website onto your school laptop (a link is provided on the SHS AP Physics homepage and in the links section above if you'd like to download the software on your home computer).  To begin the program, select CLEA_JUP and Login. After entering your names and lab table number, choose the Start option to set the starting date and time. Note that during the lab you may want to go back to this table to reset the “Interval Between Observations.”

Click on each moon, using the highest magnification to get the best position measurement, R, which is recorded in number of “Jupiter Diameters”.  R is the distance from the center of Jupiter to the center of the moon.  Sometimes a moon will be behind Jupiter, and you will not be able to record data for that moon.  To save measurements, simple click record.

You wish to give sufficient time coverage to all four orbits. Since Io's orbital period is significantly shorter than that of Callisto, you will have to change your observation interval to both get good time coverage and to make efficient use of your observing time. You need to cover a full period of the orbit from, for example, the moons most eastern position to its most western position and back.

You should collect approximately 20 days of data, then use the plot function to create r vs. t curves for each moon.  The graph is a sine curve whose amplitude is orbital radius and wavelength is period.  Now using the orbit of each Galilean moon, determine the quantities that you would have to graph in order to obtain a straight line whose slope will yield the mass of Jupiter.  You will have to convert Jupiter Diameters to meters and years to seconds.  There are 1.43x10^8 meters in one Jupiter Diameter.

2.    There are moons beyond the orbit of Callisto. Will they have larger or smaller periods than Callisto? Why?

4.    Why were Galileo's observations of the orbits of Jupiter's moons an important piece of evidence supporting the heliocentric model of the universe (or, how were they evidence against the contemporary and officially adopted Aristotelian/Roman Catholic, geocentric view)?

Please record all work in your lab notebooks organized as follows:  Title, Objectives, Background (one paragraph is sufficient), Procedure (you may simply reference this website since the procedure is in the public domain), Data (observation data, period, and orbital radius for each moon), Data Analysis to include all five graphs, slope calculation, and percent error calculation, and Conclusion (addresses the objectives and the concluding questions stated above).